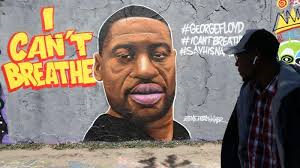 You take my breath away!

Though the literal meaning of these two phrases is the same, their messages are profoundly different. Something or someone who takes my breath away leaves me feeling loved, joyous, or amazed. But whatever or whoever takes away my ability to breathe threatens my very life. It is vital to hear the correct message or else our response will be off the mark, injurious, even fatal.

In the 1960’s a landmark new sitcom appeared called All In The Family, that centered on the household of Archie Bunker. One of Archie’s tactics when his wife, Edith, would interrupt him or say something he disagreed with was to tell her to “stifle,” that is to cut off her air, to suffocate herself, at least as far as her ability to speak.

I have not had my knee on anybody’s neck, I have never put someone in a choke hold or smothered anyone with a pillow, but when I cut someone off who is trying to tell me something, when I even just stop listening and wish them to shut up already, when I assume I know more than they do and formulate my reply while they are still speaking, I stifle them, I cut off the air to their personhood, and it is an act of violence.

To allow someone to breathe means more than just letting their body get its required amount of oxygen. It also means to allow them space and air to express themselves. It does not mean that I must listen, but it does mean that I must not stifle them. If you tell me that “Black lives matter,” and I immediately reply, “well, really, all lives matter,” I have uttered a factually correct sentence that totally misses the point. By saying “all lives matter” I imply that I really don’t want to hear about your pain, to learn from your experience, or to value you as an equally precious fellow human being. I put myself in a position of assuming that I already know all that I need to, and that my mind is already made up.

I must confess that I have done this in the past. In my home city of Cleveland, after Tamir Rice was shot down by a policeman who should never have been hired, I was furious, but I think I was angry at the horror of a kid being killed by a rogue cop; I recognized that the fact that Tamir was black made it more likely that he would be a victim of police violence, I even marched for criminal justice reform from police, prosecutors, and courts, but, in my middle class suburban middle age whiteness I still didn’t “get it.”

I can’t say that I fully “get it” even yet, though Ahmaud Arbery’s lynching, George Floyd’s suffocating death, and the worldwide protest voices have all screamed the depth and persistence of bigotry and racial injustice. The diatribes from politicians who should know better and the screeds as well as the dismissive posts on social media proclaim the urgency of the need for justice and healing.

I hear the pain in the mother who fears for her children’s lives every time they pick up a toy gun or get in a car. I shudder at what it is like for a father to teach his sons how to avoid being a target, another statistic. My life experience, while it does not allow me to fully comprehend the feelings of these people, does both allow and impel me to see that a system that produces these horrors is evil. It also calls me to account for ways that I, mostly unknowingly, perpetuate and enforce the culture of whiteness in America, and calls me to repentance and activism.

By listening to the voices of pain and protest, I allow space and air for breathing. By learning how much I do not know and how much I need to learn and do, I gain wisdom. And that insight, well, it takes my breath away!