Where was God when the Capitol was stormed?

The Proud Boys knelt and prayed in the name of Jesus during their march to the Capitol. Lindsay French, an 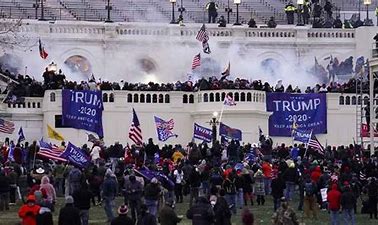 evangelical Christian from Texas was there after receiving a “burning bush” sign, saying, “We are fighting good versus evil, dark versus light.” Flags proclaimed, “Jesus is my Savior, Trump is my President.” Large numbers of those involved in the insurrection claimed that God was with them.1

So, where was God when the Capitol was stormed?

Was God, indeed, supporting, even leading the charge, like when Joshua and the Israelites conquered Jericho?2 Was God hunkered down with trapped lawmakers and Capitol staff? Was God relaxing with Donald Trump, watching the events they had incited play out on television? Was God cheering? Empowering? Protecting? Fuming? Grieving? Was God actively involved in what was happening or missing in action like Baal being taunted by Elijah?3

Those of us who hold to the idea of a deity who is somehow involved with creation and humanity have the concept that God thinks like we do, agrees with us, and supports our positions and actions. After all, if we speak and act with the best of intentions, consistent with what we believe to be true and right, and especially if a respected clergy person agrees with and encourages us, then we must be doing what God wants, and therefore, God is on our side.

As I picture how God might address those involved in the maelstrom that is the American political seascape over the past weeks, I try putting words in God’s mouth. I like the thought of God telling Donald Trump, “Be sure your sin will find you out.”4 To Ted Cruz, Josh Hawley, and their coconspirators who objected to certifying the Electoral College votes, “You shall not bear false witness.”5 And best of all is the imagination of John the Baptist wading in the tidal basin, crying to all in power, “You brood of vipers! Who warned you to flee from the wrath to come?”6 These messages fit with my personal thoughts of God agreeing with me, of course, and they are emotionally satisfying. But they are not true, or at least they are woefully incomplete. The Hebrew prophet Amos warned us about asking for God to judge, because we are all guilty; he said it would be like getting safely home, away from all the danger, and being bit by a snake curled up in the corner.7 It is a dangerous thing to claim God as a warrior for our cause.

So, where was God when the Capitol was being stormed? I believe that God is in our midst in all we do, whether for good or for ill, so God must have been there. I suspect God was trying to whisper to the President and his supporters, “Return to the Lord…for he will abundantly pardon,”8 to those under attack, “Do not fear, for I am with you,”9 and to everyone involved in the power structure in Washington and throughout the nation, including all of us who vote, “Let justice roll down like waters, and righteousness like an ever-flowing stream.”10