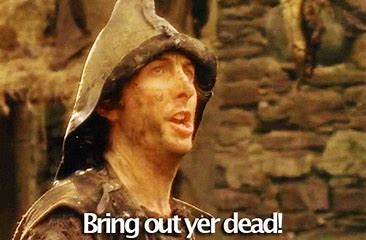 The medieval English village is squalid, the undertaker’s lackey pushes a handcart through the town, amassing putrefying corpses, the remains of the most recent victims of the plague. The undertaker rings a clanging gong, announcing that he is there to collect and dispose of the bodies, "Bring out yer dead!" Corpse after corpse is thrown on the stack, ninepence paid by each villager who avails of the service. An old man slung over the shoulder of

another objects, “I’m not dead” while the one carrying him argues that he is, or at least soon will be, and therefore the undertaker should take him. The “soon-to-be-departed” one objects further, “I feel fine! I’m getting better! I feel happy!” A quick blow with a cudgel fulfills the prophecy of his demise, and he is added to the cart. This scene from the hilarious and brilliant film from over 30 years ago, Monty Python and the Holy Grail came to mind today when I read

today of the death of Python troupe member Terry Jones. (If you’ve never seen it, it’s currently streaming on Netflix.)

In 15th century Europe, the combined devastations of the Black Death and the Hundred Years War decimated the population of the continent. Because of the persistence of these plagues, the incessant and relentless loss of life, the idea developed that what was going on was the result of divine judgment, a sense that, for some reason, God was displeased and therefore meting out punishment. Along with that arose a more widespread awareness of the fragility of life, the possible imminence of death. If one could die at any moment, then one should be prepared for it. Part of this preparation had to do with getting ready for the afterlife, so attention to the teachings and disciplines of the church increased.

One product of this concern was an anonymous treatise entitled Ars Moriendi, the Art of Dying. In addition to advice about preparing one’s soul for final judgment, this work provided instructions that would result in a peaceful ending of mortal existence. Ars Moriendi included a revolutionary idea that the one who would eventually die needed to take an active role in anticipating death, to make the appropriate choices and take the necessary actions. One needed to focus on the approaching end of life and make the required active preparations. One’s focus on the coming end of life, with the resultant active preparations, defined the art of “dying well.”

In our daily lives, we rarely encounter the apocalyptic imagery that pervaded the thinking of 15th century Europeans. But the advice of Ars Moriendi remains cogent: we are each going to die, and the dignified and peaceful end that most of us desire requires preparation. And the essential first step in that preparation is honest recognition of our mortality and consideration of our own ending. On the "Resources" tab of this website I've put together a brief list of questions that could help guide your thinking.

Terry Jones died after living with the progressive impairment of his brain by the insidious disease called frontotemporal dementia. May light eternal shine upon him.