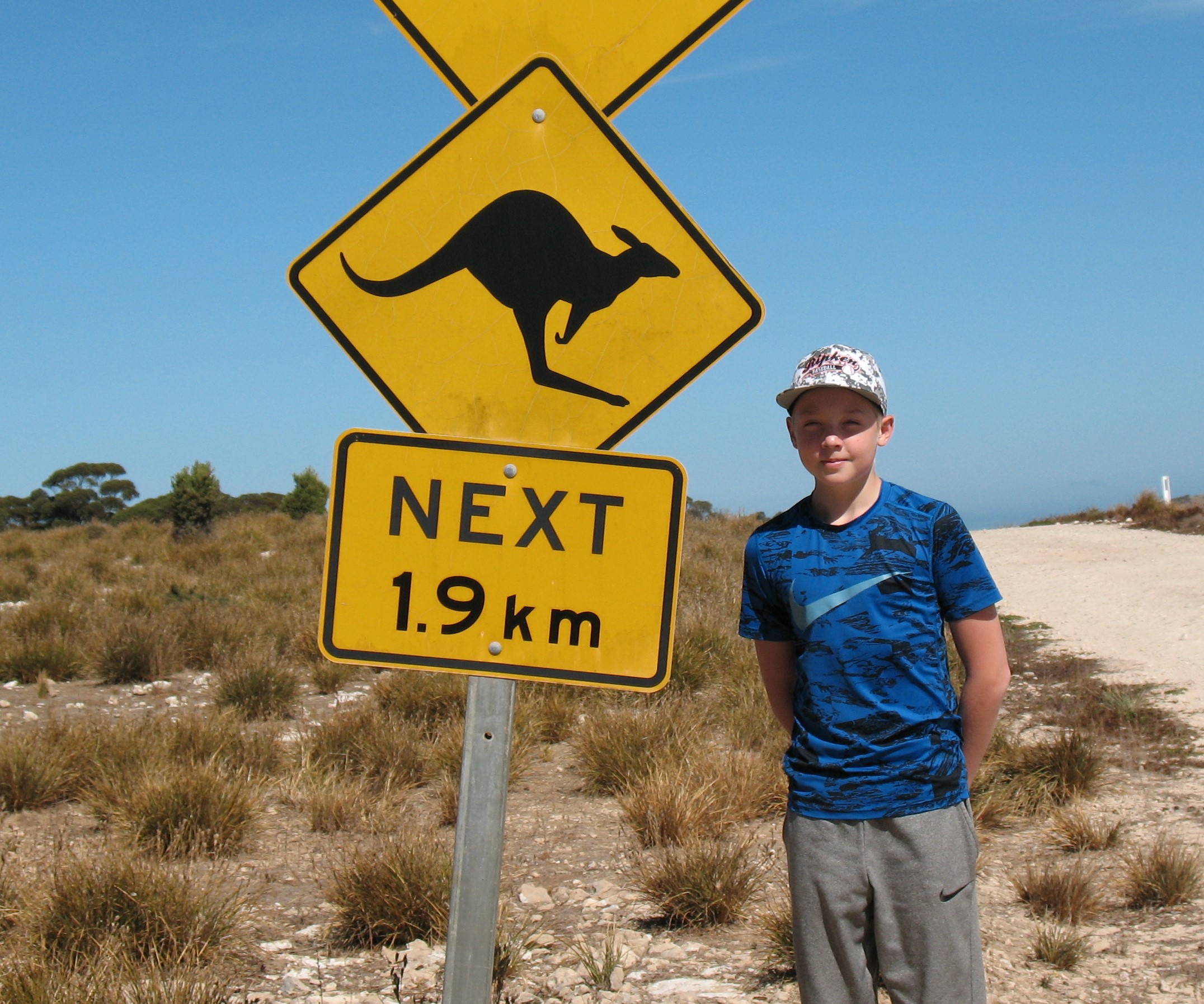 Who doesn’t love a kangaroo? Many of us encountered this big-footed, long-tailed hopper with a joey looking out of its mother’s pouch as the K in our first alphabet book. I grew up with the Pooh stories, so Kanga and Roo were friends from my childhood, and I still laugh at Sylvester (“thufferin’ thuccotasch”) trying to prove his proficiency as a mouser to his kitten son, being stymied by an escaped baby kangaroo, mistaken for a giant mouse, boxing and jumping and spinning and playing Sylvester to a frazzled pulp. “Oh, Father, I will never be able to show my face in public again!” The photo at the top of this post is my grandson Landon on our trip to Australia a few years ago, where we encountered many of these magical (and nuisance to many) creatures.

Kangaroo mother care is a simple technique in the management of low birth weight, often premature infants. As opposed to the traditional approach in neonatal units that placed the baby in an incubator, with kangaroo mother care, the mom (or a designated caregiver surrogate if she is unable to participate) holds her newborn to her chest, skin to skin, except when she needs to take a break or the baby needs to be taken for a medical procedure, feeding only breast milk if possible. Over the past couple of decades, it has been shown that kangaroo mother care prevents about 40% of deaths for these high-risk babies, and the World Health Organization guidelines now recommend its use, once the child is medically stabilized. This approach has made a big difference in mortality rates for these infants, especially throughout the developing world.

Since my medical practice has always involved sick adults, I had never heard of kangaroo mother care until an article in The New England Journal of Medicine1 a couple of months ago, reporting on a study funded by the Bill and Melinda Gates Foundation. The researchers in India and several African countries noted that the most deaths of underweight babies occur very soon after birth, that they never were medically stabilized. They evaluated starting kangaroo mother care as soon as possible after birth, keeping the baby in contact with its mother from the start, even while performing many of the medical procedures required to save the infant’s life. The average time of skin-to-skin contact was about 17 hours per day and resulted in about a 25% decrease in death rate.

Why does such a simple, intuitive, and human intervention like this have such a dramatic effect? Nobody really knows. Some experts have hypothesized about how the virtually constant contact allows the baby to become colonized with the good germs from its mother and that fewer other people touching it lessens the risk of infection. Others have suggested that the mother might be a more vigilant monitor of changes in her child or that the infant suffers less stress. More research might figure out some of the why, but the big print information is that kangaroo mother care works.

But I cannot help but wonder if part of the effect is a critical part of medical care is care, caring. The technologically intense, specialty-driven medical system that has arisen in the developed world often has left that out. Patients and families, when we admitted them to our hospice unit, encountered a different approach; many posed the same question, “Why didn’t anybody ever ask (or tell) us this before?” Nearly a hundred years ago, Dr. Francis Peabody wrote that “the secret of the care of the patient is in caring for the patient.2” Kangaroo mother care might show us that the whole person, family-based care that is the standard is hospice, is also the best approach at the start of life.